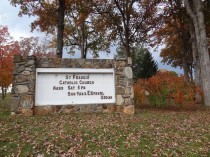 The original St. Francis of Assisi Church was finished in July 1953 and dedicated on October 3, 1953.  This building became too small to accommodate the growing parish and a building fund was established in 1976, with the intention of building an addition to the existing structure.  However, in the summer of 1977 a local benefactor donated money and assets, making the purchase of land and construction of a new church building possible.  This spurred parishioners to raise the needed funds by making pledges and holding such money-raising projects such as raffles, baked good sales, bingo, dinners and dances.  The

On December 25, 1981, the first Mass was held in the new church and the dedication was celebrated on July 25, 1982.  In 1996, the need for a Sacristy, more office space and classrooms became apparent.  Again the parishioners pulled together and raised the necessary pledges to fund the new addition. This space now includes a Chapel, library/meeting room, offices, storage space and restrooms on one level.  The lower level includes classrooms, storage space and restrooms.  This was dedicated on June 22, 1997.

However fine the structure is, St. Francis of Assisi Parish is the Community of people practicing their Catholic Faith in a manner that reflects the sentiments of our patron, Saint Francis of Assisi.